Key findings from our ELT in Barcelona survey

Earlier this year James and Melanie, two SLB members, conducted an online survey. It looked at teacher demographics, teaching background, working conditions and teachers’ reflections on the ELT industry. If you’re reading this, you might be one of the 190 people who participated. In this post, we’ll give you some background about the survey and share the key findings.

Through interactions with members and other language teachers, it’s clear to us that there’s widespread discontent with the current state of affairs of ELT in Barcelona. An integral part of our vision as a cooperative is to advocate for equal opportunities and fair working conditions, which is why we felt there was a need to go beyond anecdotal accounts and explore these issues in more detail.

Back in February a draft survey was piloted with cooperative members. Based on their feedback we created a final version of consisting of 26 questions. This was published on SurveyMonkey and distributed among English language teachers in the Barcelona area.

Here is a visual representation of the employment status of respondents. As you can see there was significant crossover between the different sectors, with many respondents belonging to more than one group. 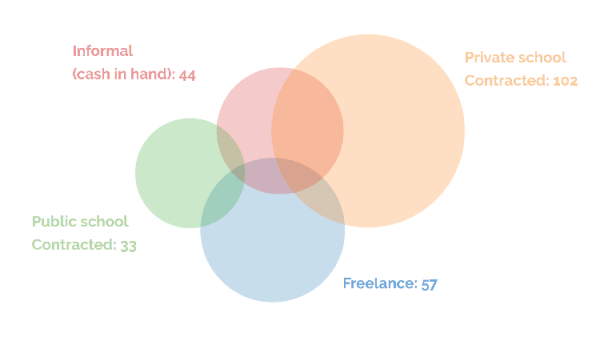 In addition, 23% of all participants indicated that they did some informal work to supplement their income.

There was great disparity in respondents’ earnings, with reported rates of pay ranging from €7/hour to €100/hour. To a certain extent, this reflects the differences of experience, qualifications and expertise among practitioners. However, what’s concerning is that a significant proportion of respondents are on contracts which provide less than the living wage. This may explain why so many teachers are having to undertake additional, cash-in-hand work.

It’s clear that workplace precarity comes in many forms, with some respondents reporting being on zero-hour contracts, having no fixed hours and being “fired and rehired” – this was most prevalent among teachers contracted to private schools and academies, where only a quarter said they had an indefinite contract. As for freelancers, one respondent said that “going autónomo (freelance) seemed the only option to earn a professional wage”, but then decided that it was “inherently precarious”.

Of the limited number of non-native English speaking respondents, eight reported negative experiences of a discriminatory nature. These included recruiters being less likely to hire teachers if not native or, indeed, not “looking like a native speaker”; unreasonable preferences from schools and parents for NESTs, regardless of their qualifications or experience; and, in general, a focus on providing students with NESTs over quality education.

Participants were unequivocal in discerning the main problems with ELT in Barcelona, but also vocal of what they would like to see change. From the analysis of the qualitative responses, four core areas were identified: Photo by Pedro Sandrini from Pexels

Whatever our professional grievances may be, awareness is a necessary precursor to action. For example, thanks to consistent pushback and reporting about the use of terms such as ‘native speaker’ in job descriptions, we are starting to see recruiters use ‘native level’ instead. Of course, this doesn’t put the issue of discriminatory practices to bed, but it is a sure sign of progress. It is our hope that by highlighting the key issues in our industry and vocalising the improvements that teachers wish to see, we can begin to pave the way for further changes.

Full report – “ELT in Barcelona: The current state of affairs”

There are 2 comments so far